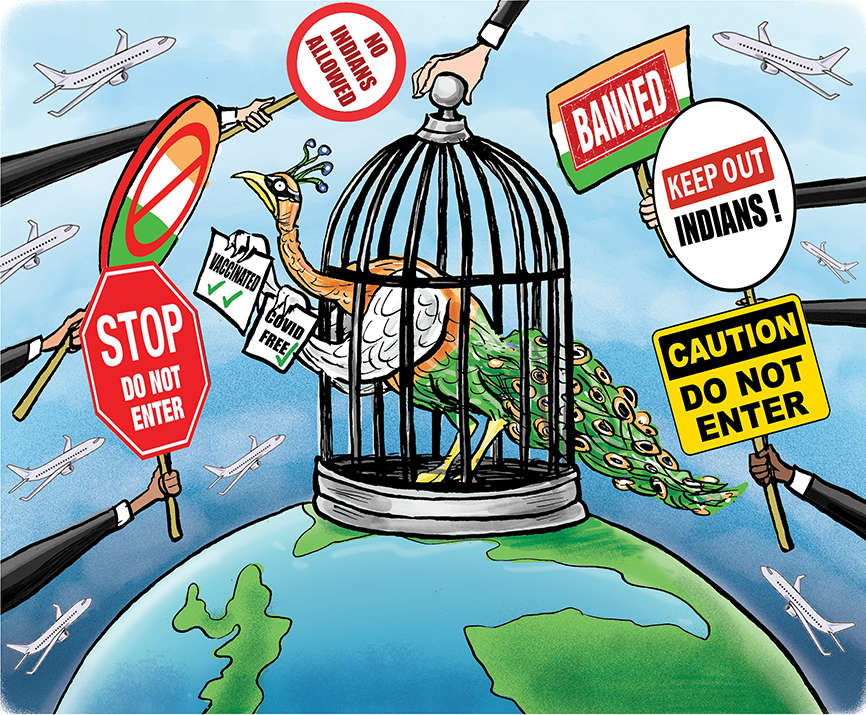 At the time of writing this, certain EU countries have finally approved Covishield as an acceptable vaccine for their vaccine passport programme. But the central European Medicines Authority has still not given approval to Covishield, even though it has approved an identical AstraZeneca vaccine.

More importantly, travellers from India are not allowed in most parts of the world. The US, Canada, Europe, most countries in Asia and several in the rest of the world have simply shut the doors on our nation. These travel directives, issued in April due to the deadly second wave in India and the spread of the Delta variant, remain in place despite our much improved situation in July.

Daily new cases in India have dropped over 90%, from their peak of 400,000+ in early May to less than 50,000 on July 1. While we still have a lot of Indians left to vaccinate, over 60 million or 4% of our population is fully vaccinated. Around 340 million Indians or 24% have received at least one dose.

However, there is no talk of when other countries’ draconian, unfair, and potentially racist directives will be removed. You could have tested negative at departure and arrival. You could be fully vaccinated. You could even be willing to do a two-week quarantine upon arrival. However, if you come from India, you are simply banned. No flights, no entry. Nothing.

You could have a job to do, families to reunite with, a college to attend – countries will just not have you if you come from India, but they are OK with travellers from other nations.

These bizarre regulations make no sense. At best these are unscientific rules. At worst, they are borderline racist. This is causing millions of Indians hardship, hurting India’s global image, and is damaging to our economy and FDI situation. We as Indians and our government machinery must make it a top priority to bang the table hard to make these crazy travel bans go away.

We get it. Nobody in these current times has the right answers. Every country is trying to do its best to manage Covid. Nobody gets the policy right every time. However, our caseload on a per capita basis is already much lower than many of the countries banning us. For example, the UK, with a population of 68 million is currently clocking over 27,000 cases a day. This translates to a daily new caseload of 397 per million population.

Now take India. With a population of 1.4 bn, India has less than 50,000 new cases a day. This translates to a daily new caseload of 36 per million population.

Yes, we, as per official numbers, have less than 1/10th the cases of the UK on a population-adjusted basis. And yet, it is the UK that has banned Indian travellers – tested, vaccinated, quarantined or otherwise.

You may say Indian numbers are not accurate. Fine, be conservative and triple them. We are still way below UK numbers on a per capita basis. Not to mention any person travelling abroad is tested negative before and after their flight. He or she could also be fully vaccinated (if required)! But no sir, Indians are just not welcome.

The UK is just one example, but the same treatment is being meted out to India by plenty of other countries. There is simply a refusal to lift the diktats issued in a different set of circumstances. One understands the need to be careful and not make allegations of racism upon the first signs of unfairness. Playing the victim card is also not helpful. However, there is mounting evidence to show prejudice against Indians.

Here is another bizarre example of the ‘Indians keep out’ policy that transpired this week and remains only partially resolved. An EU vaccine passport programme has been launched. It will allow people to travel freely within the bloc from July 1, if they have had one of four Western-made vaccines. While this includes the AstraZeneca shot, it does not extend to Covishield, the Indian version produced by SII.

Now here’s the thing. The approved AstraZeneca shot is the exact same as Covishield, which is simply the brand name used for the AstraZeneca vaccine in India. Why didn’t the EU automatically include Covishield when it approved AstraZeneca? The European Medicines Agency gave some weak roundabout explanations and still hasn’t changed its directive. Fortunately a select few EU countries have admitted Covishield after the issue was raised.

We Indians still shouldn’t attribute this to pure racism? What should we attribute it to then? Pure stupidity? The reality is it is easy to be prejudiced against developing countries with low per-capita incomes such as India. Also, the sad truth is these prejudices, when turned into directives, don’t really go away that easily. India’s contribution to developed world GDP is low, and in current times, the developed world can function quite well keeping Indians out, whether for rational reasons or not. Hence, it is up to India to make a noise against unfair treatment and bring back some normalcy and equality. This is not a brown-people virus.

Views expressed above are the author’s own.